This morning we got up early at 6:00am. We both felt so well rested having finally slept in a bed. A firm bed to be exact. We got showered, dressed, got ready, and went to the hotel breakfast. When we were seated, they asked if we wanted coffee. They poured our coffee for us, then we could get up and go to the breakfast buffet. Contrary to popular belief, I am a simple gal when it comes to breakfast. I am not much of a breakfast person either. I did see they had croissants and I love croissants. I put one on my plate, then I went to the hot foods area. I noticed they had scrambled eggs, but it was the runny sunny side up scrambled eggs, and the bacon was whole bacon, and probably delicious, but I like simple thin bacon not used to seeing bacon like that, baked beans; I only eat those at cook out if that, black pudding; some kind of food that was shaped in black circles with pork in it I passed on that, but I did see someone making an omelette. Omelette? yes please! I asked for an all vegetable omelette the guy said, give him “5 mins.” Okay, so I made my way over to the table with my croissant. I nibbled on my croissant and waited until Drew came back with his plate, which was full, before going to check on my omelette.

When I approached the omelette station, he handed me my plate. The omelette looked so good. I sat down at the table across from Drew and we ate breakfast, and planned our day. I had so much I wanted to in Bath and I was so well rested! I couldn’t wait to see Bath!
z

When we finished breakfast, we went up to the room and got ready to leave. We grabbed our book bags, then went downstairs, out of the hotel, and into the madness that is the metro station. We approached the information desk, and waited to see what platform the train for Bath was departing on. This was where everyone else was standing around.  (I forgot to add, after we got showered last night we went down to the station and bought our tickets for the train to Bath.)

When they finally announced the platform, everyone ran to their assigned platforms to board the train. It was a mad dash to the platforms. I almost got lost in the crowd, but being short I was able to navigate my way successfully. Drew is so tall and I can pick him out of a crowd anywhere. I always have been able to. 🙂
When we boarded the train, it was an hour and 26 minutes, until we arrived in Bath.

We had no clue where to go, once we got off the train, but we saw this sign so we knew we were in the right area. Bath is the cute historic town. Everything looks like it is from another time, so well preserved.

This is me walking, quaint shops, narrow streets, no pavement, but cement blocks. It is so cute and peaceful, very relaxing. Our first stop was the roman baths. I didn’t care too much for the history. It is a bit too far back for me to imagine, but Drew really enjoyed it. They had statues of Julius Caesar and various baths that were in this Spa and what they were used for. There is still a working Spa where you can go for wellness and massages, but we didn’t have the time or money for all that. We did get to put our hands in some really old water, that roman’s used to bathe in. After we did this, we saw the sign that says, “Do not touch the water, drink it, or bathe in it. k the water, or bathe in it.” hehe oops!

We did get to drink actual Thermal water, just like Kiera Knightly did in the movie the Duchess, but I didn’t get to wear a pretty dress, while drinking it. The water tastes like mineral water. It is warm, and has a sulfur taste to it. It isn’t too bad. I had a couple cups of it.

After the spa, we had tea in the Pump Room: The best way to describe this experience is like having a tea party with the love of your life. I have always had tea parties as a little girl, but having one like this with the love your life, in this gorgeous Georgian style room was a dream come true.
We had a tray full of goodies, scones, sandwiches, macrons, etc. We could not finish it all, but we were so relaxed. After Tea in the Pump Room, we went to go explore more of Bath. I stumbled upon Jane Austen, in her novels, Persuasion and North hanger Abbey both take place in Bath. “Oh, who can ever be tired of Bath”-Jane Austen
I am not really a huge Jane Austen fan, but it as great to stumble upon her and take a picture with her. I do like the time period of her novels, and the characters, but something about the style of her writing, but I don’t have beef with her. We did not have time to go into the Jane Austen center.

We had tickets to see the Fashion Museum, which was going to be held in the Bath Assembly Rooms. I was so excited. The Bath Assembly rooms was one of the locations where they filmed my absolute favorite movie, “The Duchess.”

When we walked into the Bath Assembly rooms, we told them we were here for the fashion museum, we showed the receptionist our tickets, and she told us that the museum is downstairs, and she told us what room to go, but we were free to look around. They were having an event going on in the Tea Room. We couldn’t enter, it as the Bath Festival so there was a group of speakers there, but the Tea room is where they filmed this scene in the movie, where the Duchess Duchess is presented to the admiring crowd and is titled, “the empress of fashion.” I was a little bummed, that I couldn’t see this room.

Straight ahead was the Great Octagon room this the room where in the movie The Duchess,” Georgiana is confronted by the Duke in Bath. He gives her an ultimatum give Grey up. If she does not return to London with him, then her dreams of changed world and Grey’s dreams of becoming Prime minister will be “dead as ash” and she will never see her Children again. We were able to step inside the Great Octagon room. Although there was a book fair going on, I was still able to see the room where they filmed the scene. After the Great Octagon room, we went downstairs to the Fashion Museum. The exhibit was titled 100 Years of Fashion. had on display, all sorts of dresses, and outfits from the different time periods leading up to modern day fashion. It was so cool to see. We even got to try on period costumes. When we finished at the Fashion Museum, we had one more stop to make. I couldn’t wait to get there, #1 Royal Crescent: The royal crescent is another location where they filmed a scene from the movie The Duchess: 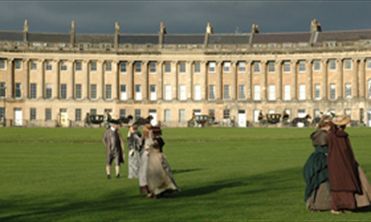 There were so many gorgeous rooms in this house, and they all reflected the time period, but this room in particular gave me a certain feeling. This is the lady’s parlor. Where the women would retire and have tea, and play the harpsichord. I snuck a picture of the harpsicord. The woman said it is on loan and there for we cannot take pictures.
However, in this room, there is a painting on the wall above the fire place. The woman looked so familiar. I thought it might be the Duchess of Devonshire. I inquired about the painting. The guide said, “It was an unknown woman of the time.” I didn’t believe her and the look of disbelief was written all over my face. The guide asked me, “Who I thought it might be?” I said, “It looks like the Duchess of Devonshire, Georgiana Spenser Cavendish.” She said, “That is really observant of you, but it is not her. She typically wore those big hats, and feathers.” I smiled, but she didn’t always have them on. Then, I thought how sad to be marked as an unknown woman of the time. I looked at her and she looked back at me, it felt as though she and I connected it is weird, I know. The guide handed me the binder, that explains all the artifacts in the room, the paintings, and the origin. She let me flip through it. I read the blurb about the painting, “an unknown woman.” I read it and felt so sad and so haunted.

After we left the Royal Crescent, we made a stop at a pub for a drink. Then we checked out Bath Abbey, before heading on the train back to the madness that is Paddington, London. Once we got back to the hotel, we showered and got ready to go dinner. We wanted to go to the most traditional English Pub we could find. We went to The Pride of Paddington, where I had my first English beer titled, “The Proper Job” and fish and chips! That night, I went to bed so thankful. That night  was our last night in Paddington. Let me say, if you are thinking of traveling to England. Do yourself a favor do not stay in Paddington, unless you don’t mind the crazy amount of people. If you are low key and border line between bougie and hipster like I am, then stay away from Paddington. Stay in Westminster, which I will tell you about later! 🙂 The next day, we traveled to Paris. 🙂