Once we landed in Heathrow we got off the plane, had to go through border security. One the plane, we filled out our landing sheets. The flight attendant said, we could use one, since we had the same last name. No need to fill out two landing sheets. Okay, then the border patrol said, “Who told you that? You need to fill out one for yourself too.” I said, “We have the same last name.” He said, “It doesn’t matter.” I was so frustrated, but I took the time to fill it out. I didn’t want to get nasty with the border police. I was holding back my emotions, and said to myself, “Girl you are in England.”
After we passed the border police and got the stamp of approval on our passports we got our baggage at the baggage claim and then made our way to the Heathrow express.

“Mind the Gap” is written everywhere in England. They always say, “Mind the Gap.” Drew and I said to each other all the time over there. It as funny. We took the Heathrow express to Paddington, London where our hotel was. We were hoping our hotel would be ready for check in. It was around 10am when we arrived at our hotel.

As soon as we got off the heathrow express, and dragged our luggage off the train, we were at this super busy metro station. People coming and going. Everyone had agendas, and plans for the day business men, business women, tourists who have been here a few times, older people, college age people all coming and going. We walked over to the information desk. We told them were are staying at the Hilton, and asked how do we get there from here? They said, there is a lift (elevator) that will take you to the second floor of the metro station. Make a left and you will see Starbucks on your right and straight ahead of you is the entrance to your hotel. So we found the lift, and pushed the button to go to the second floor. We got off of the elevator, dragged our suitcases past the Starbucks, and into the entrance of the hotel. We made our way to the reservation desk. The lobby had an art-deco design to it. It kind of reminded me of the Great Gatsby. 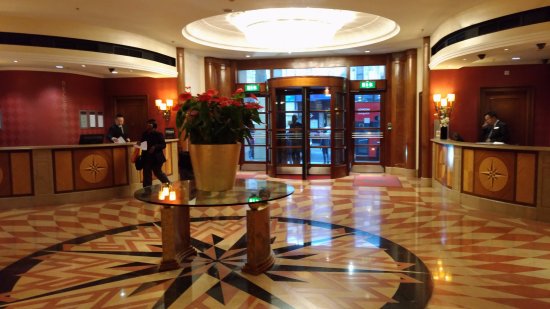 The front of the hotel is so beautiful. It supposedly was a Victorian castle that they transformed into a hotel.

At the front desk, we gave them our name and told them that we had a reservation for two nights. They pulled up our reservation, and said that our room isn’t ready yet, and asked us to come back in a couple hours, and hopefully it will be ready then.

However, we are able to leave our luggage with the concierge and he will take it up to our room, when it is ready. I sighed. All I wanted to do was brush my teeth, shower, and get ready to head to Chelsea. We had plans to tour the stadium, museum, and eat lunch close by. I did not want to go like this.  I was beginning to think I had no choice. We handed our luggage over to the concierge and then he told us how we are going to need an Oyster card, while we are here. I said, “a what?” He said, “An Oyster card.” He said, “Come with me, I will show you.” We walked across the street with him and then to the metro station. Then I realized, an Oyster card is like our Pitt ID back home, except this is for the metro. I said, “oh okay.” He said, “here I will help you.” He showed us how to work the machine. We both got cards and loaded 30 pounds on our oyster cards. We didn’t rent car, so it was either walk, metro, train, or hop on and off bus. I guess these would come in and handy.

We went back to the hotel, and still the room wasn’t ready yet, so we stopped for at a coffee shop called Acosta. I looked at the menu and I ordered a small Americano, which is espresso and water. Drew ordered the same. It was the closest to a red eye (Coffee with espresso). We sat down and drank our coffee. We both were so tired, but knew that we were going to have to leave for Chelsea soon, even if our room wasn’t ready yet. When we got back to the hotel, still no room available so we got on the metro and made our way to Chelsea.